Silver is a greyish white, lustrous metal, easy to work and polish. In the ancient times it was very expensive and it plays a vital role in Judaic law. After Columbus discovered America, the price of silver fell dramatically due to discovery of huge deposits there. Nevertheless, it still is a very important material in jewellery making because of its unquestionable beauty.

In ancient Greece, Hippocrates – “the Father of western Medicine” – claimed that silver had healing properties and helped heal wounds. American settlers put a silver dollar in milk to help it stay fresh for longer without cooling.

Because pure silver is a very soft material, alloys of silver and small amounts of other metals like copper are used for production of jewellery, coins and everyday use objects. This way silver is given strength while preserving its original appearance.

The following silver fineness standards are in use: 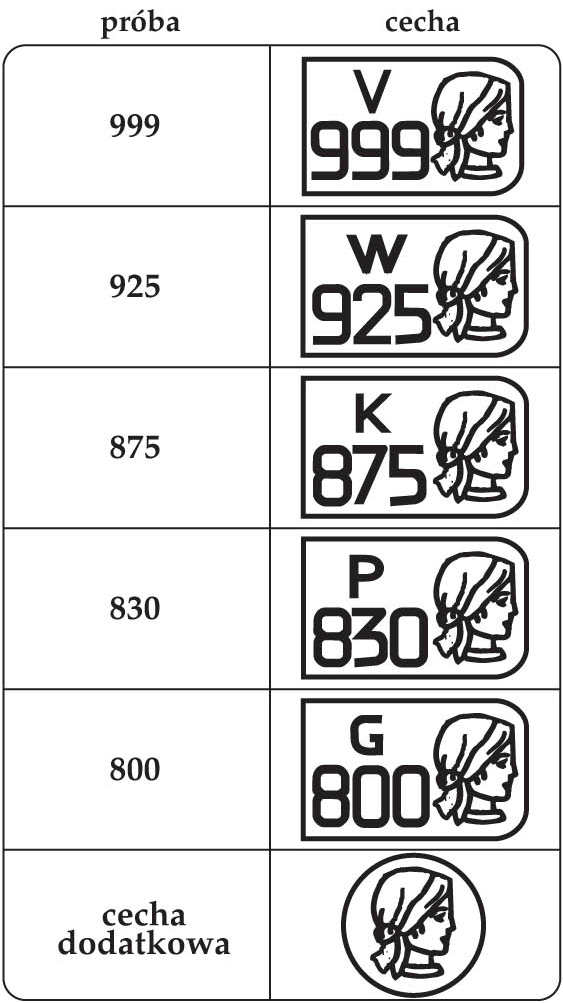 In ancient Egypt huge amounts of this metal were mined for the exclusive use by the divine rulers. From Egypt, gold travelled to other countries where it became a monetary unit. Search for gold deposits was a strong driving force behind the territorial expansion of Roman Empire and also behind European exploration of America.

Nowadays, pure gold is used mainly in the shape of bars as investment and as national reserves. Because this metal is too soft for production purposes, alloys of gold and other metals like silver and copper are used. Gold alloys also have a lower price making gold more affordable and more available.

We determine the amount of gold in an alloy in either of two ways: either by karats, or by percentage within the alloy. Pure gold is described as 24 karat gold. Each karat stands for 4.167% amount of pure gold, so for example 14 karat gold equals 14 x 4.167 = 58.338%. (In most countries except the USA, the counterpart of 14 karat is the standard gold fineness of 585.)

The following gold fineness standards are in use:

Platinum's name derives from Spanish “platina” - “little silver” - which connotes the belittling attitude to this metal. Until 19th century, platinum was considered worthless and fraudsters used it to imitate silver. Although it had served as decoration for centuries, it was scientifically discovered only in 18th century in Columbia. Platinum is a rare metal that does not cover with patina.

Nowadays the metal is highly valued and expensive. Because it is relatively soft, alloys of platinum and other metals such as nickel are used for production of jewellery and other items.

The following platinum fineness standards are in use:

A lot of countries have no central or defined sets of assay marks for precious metals and marks vary depending on the manufacturer. Also, only 19 countries in the world, mainly from Europe, have so far signed the international Hallmarking Convention.

The countries that have signed the Hallmarking Convention are ( CLICK ):